Have you looked for a local business or service in your local area recently? Chances are you have, and you probably used an online search engine such as Google. Google have even developed products entirely around local search via their search engine, and products such as Google My Business and Google Maps have helped seen a surge in local search related queries. Now, Facebook have come to the table and it could potentially be a massive disruptor to Google’s local search dominance.

Although nothing has been released on the Facebook Official Blog, SponsoredLinX Facebook expert Lachlan Dann recalls Facebook talking about a service search related product in a company webinar which took place in Q4 2014. While the launch date had been predicted to be around Q2 2015, it isn’t until now that people have noticed the new Facebook feature, which suggests that it has only been released in the last few days.

Facebook’s Services Directory allows Facebook users to search for local businesses which have been rated on their Facebook Business pages via a star rating and/or review.

In a nice personalisation touch, Facebook has customised the background image of the Services Directory main toolbar based on where you are searching for business services. For example, the image below for me shows Brisbane CBD and the Brisbane river to represent my search in Brisbane.

Below this is a grid and list of the ‘Best Professional Services’ as sorted by Facebook. The images within this grid have again been customised based on previous business pages you and your friends have liked.

With so many business owners also owners of a Facebook Business page, it makes sense that Facebook create a feature which allows users to tap into this directory. Whether or not the way business are placed in the directory search results is based entirely on star ratings and user reviews is unclear; there are differing opinions on this and with no official word from Facebook it is hard to say. 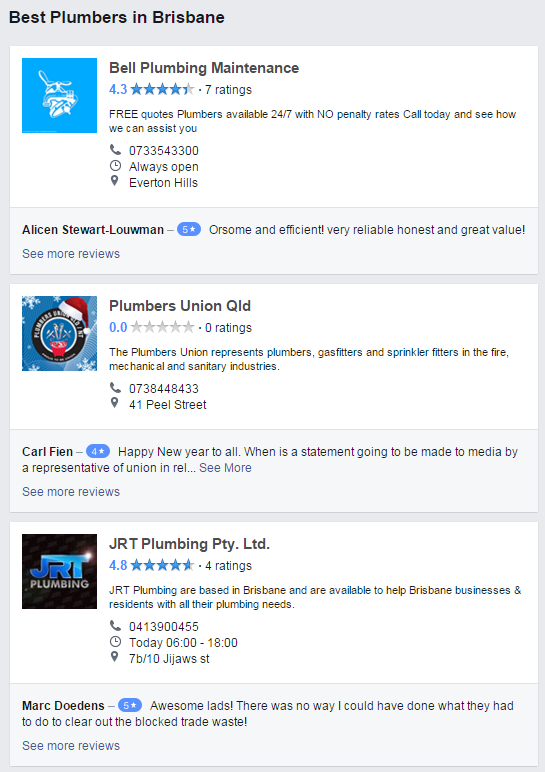 As you can see from the image above, the first three results I am presented with when I search for Plumbers in Brisbane presents me with two business pages which have received star ratings, but then one which hasn’t received any. However, all seem to have written reviews but what Facebook has taken into account exactly with its ranking algorithm is still unknown.

What can confidently be assumed though is that Facebook is giving users another reason to use the platform to search for local businesses and services, therefore giving business owners another reason to be on the social media platform. Is your business on Facebook? If not, give the team here at SponsoredLinX a call today on 1300 859 600 and learn what Facebook can do for your bottom line!