It can be difficult to keep up with all of the technological advances happening in our world – there’s always so much going on! As part of our weekly blog, SponsoredLinX take a look at some of the biggest social media news announcements to have caught our eye during August.

FB has a new page layout for desktop users, and we like it! The update, which was rolled out last week, features a more prominent ‘call to action’ button and a new navigation layout – moving the different sections of your page to the left hand side (such as ‘home,’ ‘likes,’ ‘about’ etc).

For the most part, the normal elements you’ve become accustomed to will remain, however you’ll notice they’ve been reorganised to provide a cleaner and crisper look.

Some other changes include: It’s a fact that Twitter hasn’t seen a lot of success in recent years from its advertising platforms. In fact, the tweeting giant has experienced two straight quarters of lower-than-expected demand from advertisers. However, change may be coming. As of last week, Twitter introduced their ‘conversational ad format’ to advertisers around the world.

Originally introduced earlier this year, the format allows advertisers to encourage their followers to interact with their ads – via branded hashtags. An example of this might be a Twitter user sending a tweet with a branded hashtag, a photo, or video to their own followers.

“These formats are exclusive to Twitter and make it even easier for consumers to engage with and spread a brand’s campaign message. It’s a powerful way for advertisers to extend their presence across Twitter. During the beta, brands saw an average 34% earned media rate. That means for every 100 paid impressions, an advertiser receives 34 earned impressions!” 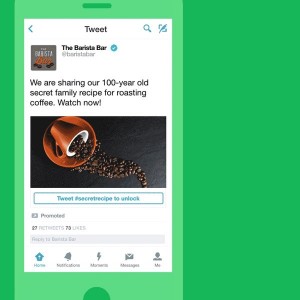 Last week, LinkedIn announced that it would be rolling out 30 second videos for 500 of its most influential users. Some of the ‘influential’ few who have been mentioned so far include ‘Reid Hoffman (American Entrepreneur, Co-Founder of LinkedIn), Naomi Simson (Founder of RedBalloon) and Mike Feinberg (Kipp Co-Founder).

“These videos will cover questions posed by the influencers themselves, or discussion on areas they are interested about. People who follow the influencer on LinkedIn will be able to comment on the topic, and see what opinions other influencers hold.” – says Smart Company.

In what appears to be another visible example of ‘Snapchat envy,’ Facebook has introduced ‘stories’ to its platform. Only this isn’t a new advancement – it’s an almost exact clone of Snapchat. Essentially, it’s a feature that allows you to post photos or videos that play together as ‘one story,’ and disappear after 24 hours.

Considering Instagrams’ reach of 500 million monthly users, it’s bound to be a success. However, it is an interesting and brazen move, made all the more so by the fact that Instagram tried – but failed – to purchase Snapchat back in 2013.