Would You Trust Facebook Chatbots To Order Your Pizza?

They’re strong, they’re clever, and they’re making their mark on the world. No, this isn’t a case of chimpanzees rising up and running amok through the city; in fact, my subject isn’t even a real-life being.

Who is it? Why, it’s the savvy chatbot. 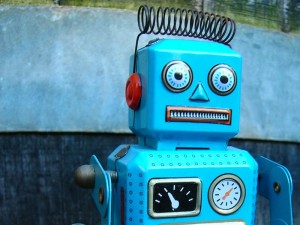 If you haven’t yet heard of the chatbot, let me take a moment to explain to you what it is, and how it works. Firstly, imagine that you’ve just seen a fantastic new summer dress released through your favourite store, or perhaps a new book you’ve been itching to read. Usually, you’d head to the company’s website or physical store, find what you’re after, and take it to the counter (or add it to your shopping cart). But what if you could do all this by firing off a quick Facebook or twitter message to a ‘digital assistant’?

Welcome to the world of chat-bots! With these nifty little cyber creatures, no longer do you have to wait for a real-life human to get back to you with an answer, or a confirmation of your order. By firing off a quick message on Facebook chat or Twitter, that answer you’ve been craving (or delicious cheese and bacon pizza) can be yours straight away.

And if you think I’m exaggerating when I talk about ordering pizza through social media – I’m really not! Just last week it was announced that Pizza Hut would be rolling out (in the coming months) a chatbot utility for Twitter and Facebook Messenger.

Labelled as ‘social ordering,’ the function allows hungry customers to add the bot as a ‘friend’, and then place an order through a ‘digital assistant.’ The bot can even give you a list of your last three orders, allowing you to re-order your favourite with the push of a button.

Meanwhile, chatbots are also being introduced in a range of other businesses, from restaurants to flower stores, and even online travel coordinators (such as Pana and HelloGbye). Just last week, it was announced that News Corp had launched an AnzacLive Facebook chatbot (based on the real-life WW1 veteran Archie Barwick)

“Currently, there are bots for CNN that allow people to have relevant news messaged directly to them, while 1800-Flowers have a bot that allows users to order and receive recommendations based on their favourite seasonal flowers. Meanwhile, there’s even a cool little bot named “Poncho” – which is a cat that tells you about the weather, gives you recipes if you tell it you’re hungry, and will even give you a bit of sass if he doesn’t like what you’re putting down!”
Lachlan Dann (SponsoredLinX Social Media guru).

As you can expect, it will likely take some time for chatbots to become a comfortable and error-free experience for consumers. A good example of what can go wrong was seen earlier this year, with Microsoft’s Artificial Intelligence bot ‘Tay,’ who in just 24 hours, was corrupted by racist and sexist twitter commentary. Given that the AI bot was designed to ‘become smarter’ as more users engaged with it, it soon became clear – as Tay began to parrot highly offensive commentary – that there were a lot of factors Microsoft hadn’t yet tweaked.

Sure, there are many adjustments and fine-tuning to be made, but as chat-bots continue to grow, we will likely find ourselves communicating with brands much as we would our friends and family. According to various news outlets, there are currently 11,000 bots on Facebook Messenger – just three months after their launch!

Despite hiccups along the way, AI chatbots have a definite allure for many businesses. By allowing customers to have ‘what they want, when they want it’ through automated customer support, businesses have the opportunity to reach customers at any hour of the day.

“For some larger companies, you’d need to hire staff around the clock to sustain this kind of service, but Facebook has announced that the bot era has officially begun. Bots will be able to help field questions and could represent a major new channel for commerce, customer support, and possibly even media.”