Online Marketing in Our Daily Lives

In an attempt to further drive engagement with their customers in Australia, Nestle in conjunction with Woolworths has incorporated near field technology into in-store advertising as part of a marketing campaign within the supermarkets store for Uncle Toby’s Oats and strawberries. This isn’t the first time the chain’s marketing strategy has had to be altered to keep up with changing trends.

A report released in 2011 that the so-called war between online and offline merchants was an oversimplification, and that retailers, essentially just needed to get over it, and incorporate digital integration into their marketing and sales strategies.

In preparation for the report, there was a survey done of a mixture of young men and women, and families that found that of the 75 percent of Australians who are online, 85 percent use some form of digital media to assist in shopping. That means about 5 million households researching purchases online through retailer and manufacturer websites, search engines, retailer newsletters, email alerts, and social media before they commit to buying a product. This basically meant an entire overhaul of brick and mortar retailers after two holiday seasons passing with plummeting sales figures.

The near field technology infused marketing ploy has been unveiled in about 480 Woolworths supermarkets across Australia. The basic jist of the campaign is to encourage shoppers to use their phones whilst shopping to download relevant content on the item while they shop. In this case it would be via the NFC enable aisle fin that is placed next to the Uncle Toby’s oats and strawberries section of the aisle and if you hover your smartphone over the aisle fin, it will connect you to recipes that use the product. 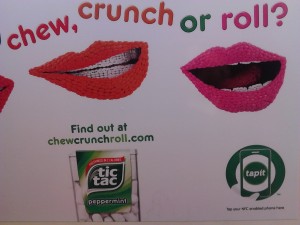 This along with technology that has been recently picked up by American super-chain Wallmart, could revolutionise the way we shop. The technology that is being used by Wallmart would basically take the battle between Australian retailers Coles and Woolworths to a whole new level. It works by allowing the retailer (in this case Wallmart) to track their customers, so that it can send customers text messages offering cheaper deals if they are standing in line at a competitor’s store.

It tracks not only where the customer is but exactly who they are and what their buying habits are, so they can target each individual customer personally. This is a huge game changer as the biggest issue that big brands have faced up until now was the fact that they couldn’t get the upper hand in influencing the sale of their products over others in the last leg of the purchasing journey and now that is possible.