What Advertisers Can Learn From These Controversial Ads

Aim for clever – not offensive – storytelling

Humour is such a subjective thing. What is amusing to one person, can be grossly offensive to another (or many people). But that said, there are some lines you just shouldn’t cross in advertising, because offensive or controversial advertising results in a lot more than just ‘hurt feelings’. According to a 2010 Adweek Media/Harris poll, over 30% of both men and women admitted to avoiding purchases from brands using distasteful advertisements.

So what should you be aware of in order to avoid the pitfalls of distasteful or controversial advertising?

As a general rule, it’s good to avoid anything that is – or could be construed as – racist or sexist. It’s also a good rule of thumb to steer clear of using graphic sexual/violent images, or glorifications of mental disorders, to try and sell your product. What were Sony thinking??

Take for example Ultra Tune Australia’s ‘Unexpected Situation’ video, which received over 200 complaints in a short space of time for its sexist depiction of female drivers. The ad was also condemned by the Ad Standards Bureau who agreed that it depicted female drivers as ‘stupid’ and ‘unable to keep a car in roadworthy condition.’ Not a good look for a company who no doubt have a lot of female customers (perhaps not so many after this advert).

The ad, which was a part of a series from Ultra Tune depicting women in sexualised or unintelligent ways, also turned off a lot of female and male customers, with many vowing to shop elsewhere.

While we’re used to seeing lots of examples of distasteful visual adverts, it’s important to remember that the way in which you promote them (for example, via social media) can also play a key part in whether an advert is considered offensive. An example of the latter is sunglasses retailer Hawkers Co, who were left embarrassed after an ill-thought tweet in early November.

“Mexicans, put on these glasses so they can’t see your crying eyes tomorrow when building the wall,” wrote a staff member, while promoting their upcoming sunglasses range. 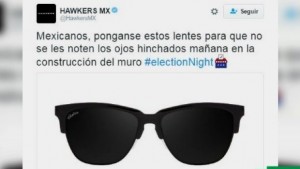 As you can imagine, it didn’t go down well – and it wasn’t just the public who were outraged. Unfortunately for Hawkers Co, the tweet was also picked up by Mexican Formula One racer Sergio Perez – who at that time, was involved in a personal sponsorship with the brand to create 20,000 limited edition sunglasses bearing his name. Whoops.

Following on from the tweet, Perez swiftly departed ways with Hawkers Co, explaining that he would be pulling out of the partnership despite the sincere apologies of the brand.

“They are very sorry and I am very sorry, too. I know the owners and they have done incredibly well and the relationship was going to be very successful. But my country and people come first…”

“I feel sorry because it is a great brand…but the brand must be in charge of the social manager. It is a shame that the brand pays for it. It is a mistake by one person and I am sure he regrets it now but that is how things are in life sometimes.”

This one tweet cost the retailer 20,000 pairs of sunglasses, and is a strong reminder of the importance of having clear social media policies in place – not only to educate staff about what is and isn’t appropriate, but to also ensure campaign posts don’t go out unapproved by higher management.

As stated by social media and advertising expert Catriona Pollard, “If you’re putting someone in charge of your social media you need to have trust in them, and there needs to be lots of rules and boundaries in place on what they can and can’t post.”

Remember, just because you find something humorous doesn’t mean that it’s not distasteful or offensive to other people – particularly your customers. The best thing you can do is to employ creative people who will work with you to create unique advertising that is clever, witty, and on point with your vision. It also pays to get an outside perspective on your advertising campaign before it is launched, to ensure that it’s going to meet your objectives.

Remember – clever, thought-provoking and humorous storytelling should be your aim, not offensive or intentionally controversial content.