Ask anyone you know, and they’ll most likely tell you how annoying pop up ads and banners are – especially when you’re in the middle of a great article, or a crucial blog post on how to bake the world’s best brownies. My usual response to these interruptions? ‘Swipe and be gone!’

Yes, gone indeed are the days where advertisers could rely on such ads to get the attention of potential customers. And as we have seen with the rise of software such as ‘Adblock plus’ (which has been downloaded over 500 million times!), it’s becoming harder than ever for businesses to get their message in front of willing eyes.

While some websites such as ‘Wired’ have taken the ‘paid content’ route – forcing people to either turn off their Ad-blocking software or pay to access ad-free content – there’s no guarantee that such a move won’t also be a ‘turn off’ to readers.

So the big question is: how can you create non intrusive ads that are more likely to reach the eyes of internet users?

Firstly, what are native ads? Essentially, they are adverts that are integrated into the organic experience of a user without interrupting the flow of their web browsing – such as sponsored/paid posts. For example, you might see your favourite blogger discussing a particular product, food or experience on their website (which they have been paid to write/talk about).

While some people may feel that a business/brand is selling out by endorsing or promoting a paid product, there are many benefits to having your product endorsed through a trusted persona – after all, consumers are often more likely to take on board the advice of their favourite athlete/blogger/Youtuber. For example, according to Nielsen’s 2015 “Global Trust in Advertising” study, branded websites are the “second-most trusted format, with 70% of global respondents saying they completely or somewhat trust these sites.” A favourite of mine when it comes to native advertising – can’t say it doesn’t grab your attention!

One of the main concerns surrounding Native advertising however, is the issue of consumers not being able to tell whether a piece of content is actually an advert; instead mistaking it for an article. This can lead to the consumer feeling a lack of ‘trust’ in what is being promoted.

That said, native advertising spending is estimated to rise to $21 billion by 2018 (according to Business Insider), which seems to point toward it remaining – on the whole – a successful medium.

Yes – technically they are still a pop up, but exit adverts are far less intrusive than a box that launches itself mid-scroll. Instead, these non intrusive adverts only appear when a reader chooses to navigate away from your website. Essentially, it’s like a ‘last chance’ offer to invite your visitor to stay on your page, and remind them of your brand. An example of an effective exit-pop up – that can also instantly drive up your sales – is a discount offer. 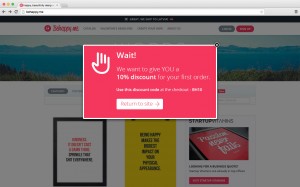 By placing a bold advert at the top of your page you can ensure your ad is hard to miss without interrupting a user’s web interaction. You’re also more likely to get around software such as Adblock Plus, which currently allows non intrusive ads (such as those on the top, side or underneath of primary content) to be viewed as part of their ‘Acceptable Ads’ initiative.

Sure, there might still be a few hardcore advertising haters out there who’ve opted not to see any ads at all, but as Adblock Plus have found, many users agree that compromise is needed in order to enjoy free content (such as being exposed to non-intrusive ‘whitelisted’ ads).

At the end of the day, there will always be challenges to getting people to view your ads, but that’s where creativity, insight and expertise come into play.

If you want to make sure your ads not only stand out, but reach plenty of customers, make sure you contact SponsoredLinX today on
1300 859 600!